Posted on 5 September 2017 by Jacey Bedford

Worldcon 75 in Helsinki was my second Worldcon, after 2014 in London. It was also my second convention that week; I started a few days earlier in London attending Nine Worlds GeekFest with a big luggage full of 11 days’ worth of clothes, a passport, and a packed schedule. Like at Loncon, I was one of the MIMO (Move-in Move-out) volunteers and helped to build the exhibits hall and dealers’ room. This involved a lot of measuring of the floor in a giant empty space, moving tables, measuring fabric, building assorted exhibits, and doing whatever the crew leaders needed. The best part of volunteering is hanging out with your friends and seeing the con go from nothing to something. The specifically best part of the build was putting together the giant photo-op wall of the Helsinki bears—Major Ursa and friends—even though each of us ended up bleeding a bit on it due to sharp plastic screws! It was our sacrifice to the Worldcon gods. Before the con officially opened, I was lucky enough to be invited to attend a reception at the City Hall and catch up with people I hadn’t seen in years—one of the perks of convention attendance and a lovely start to the event. 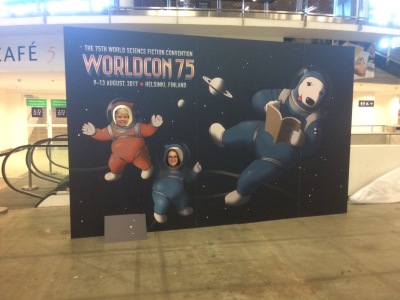 It wasn’t all physical labour, though. I also spent time on the more mentally taxing side of volunteering by being on two panels and giving a paper. On the Friday, I was on Building Resistance, which was more about real-life than fictional situations. Later in the afternoon I participated in Two’s Company: Collaborative Genre Writing, which was an odd place for me as someone whose only collaborative genre project was my first novel—which took 10 years to write and hasn’t seen the light of day! Between those two panels I gave a paper/presentation with a rather attention-grabbing title: Where are the tampons? The Estrangement of Women’s Bodies in Apocalyptic and Post-Apocalyptic Fiction. Luckily, the audience forgave my zombie and menstrual-blood images and I received some very positive feedback and a lot of questions. Once things settle down a bit, I hope to be able to find a home for the piece. In between all of that, my colleague Dr Helen Marshall and I conducted audio interviews with several editors and authors to use as part of the distance-learning component of the MA in SFF that will start next spring at Anglia Ruskin University.

Unfortunately, I only attended a couple of panels. When my schedule is packed like that, I tend toward the ‘People Before Panels’ rule and take the time to sit and talk to friends. Because of all of the busy-ness, I barely left the convention centre or my hotel to see Helsinki until Saturday afternoon when we ran away to the city centre to play tourist for a bit. I got to buy some silly souvenirs, meet up with fellow Clarion attendees from several different years, nearly walk into a monsoon (the sky went from sunny to dark in a matter of seconds!), and see a bit of the lovely city. It’s definitely somewhere I’d like to visit in the future because going to a con means always being a bit distracted and only really experiencing a new place through its fast-food restaurants (I ate more Hesburger than anyone should ever admit). 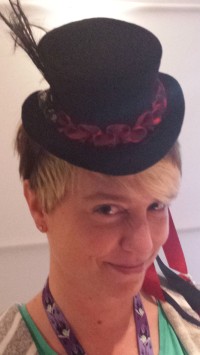 In the end, those are my impressions of Helsinki’s Worldcon: those quick, second-long images. The blue domes on the Helsinki Cathedral decorated with little gold stars. Being covered in blue chalk from the plumb line while measuring the hall floor. The downed trees we came across after the storm. Fans in an hours’ long queue to get GRRM to sign their books. Discovering Finnish longdrink. The ‘Viking guys’ camped out in front of the convention hall with a portable forge, dancing to music only they could hear. Introducing my newest PhD student to my friends. Meeting Daveed Diggs from Hamilton. The funny art in my hotel room (Donald Duck’s head on a Vermeer-style woman’s body!). And the reason I go to cons: all of the old friends I saw and new friends I made.

Tiffani Angus is a Senior Lecturer in Publishing and the Course Leader for the Creative Writing MA at Anglia Ruskin University, Cambridge, UK. Her short fiction has appeared in Strange Horizons and a variety of genre anthologies.

Everyone in Helsinki seemed to know the World Science Fiction convention was happening in their city. Even the airline knew they had a plane full of SF geeks, and they made a point of welcoming us. The convention itself got off to a shaky start with long queues and insufficient capacity in some of the rooms, but this was mostly sorted out by the second day.

I particularly enjoyed a panel on the subject of writing your first novel. I’m a bit past that now but it was interesting more generally about writing anything. Mysteriously, each panel had to wrap up after 45 minutes, despite having one-hour slots, often leaving me wanting more.

Food at the convention consisted mainly of burger meals. I experimented with a toasted sandwich at one point, which did not go well. The dealers room was mostly filled with books in Finnish, and people queuing up to ask George ‘Really Really’ Martin to sign something.

I got to hang out with Eeson & Becks all week and chat to them about Twin Peaks for their “Time for Cherry Pie and Coffee” podcast. Also managed at least brief chats with many writing friends who were attending, but in the bustle of a busy convention I never crossed paths with others. 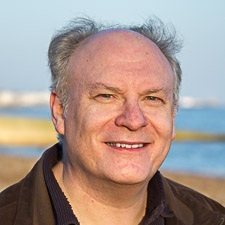 Loved Helsinki itself. The food was excellent. The beer was expensive, but I expected this. It’s Scandinavia after all. Took a trip out to the island of Suomenlinna on the last full day. The island has its own brewery, as all islands should. Eventually I was forced to head home. The very efficient trains running regularly between Helsinki, the convention, and the airport, could not be faulted. Back in the UK, the service from Gatwick to Brighton was a different story.

CHRIS BUTLER lives in Brighton & Hove, UK. He is the author of ANY TIME NOW and THE FLIGHT OF THE RAVENS. His short fiction has appeared in Asimov’s and Interzone, as well as The Best British Fantasy 2014. Find him on twitter @cbutlerwrites, and at www.chris-butler.co.uk.