Give us a short biography in three sentences or fewer.
I grew up in north London, left school at 16, and started a second-hand book and bric a brac business. The shop and flat burned down in 2000, and I spent a couple of years travelling, mostly to Zimbabwe and New Zealand, mostly watching cricket. I have one surviving stepdaughter and three step-grandchildren; I have no car, no TV and no cats.

When did you start writing? What was your first sale?
I started writing as a tiny child: as soon as I learned to write, that’s what I did. I think my first sale was a zombie story to Mary Danby for the Fontana Book of Horror in 1978, and not long after I sold a second story, The Seal Songs, to 19 magazine, and then to an anthology.

Have you always written short stories or is there a novel inside you burning to get out?
There are several novels inside me, and I have in fact finished four – one is pretty bad, two might be saleable with a lot of rewriting, and one is too short. I don’t know whether it comes from writing poetry, where one aims to distil the idea into a few exactly right words, but I do tend much more towards writing short. In 2017 Alchemy Press published a collection of some of my published stories (and one new one) as Music in the Bone, which got some decent reviews. I’m hoping to put together another collection before too long.

Do you have a preferred short story length, or does it vary from idea to idea?
It varies a lot, but as I say usually shorter rather than longer. Anything from flash fiction to 8/9 thousand words, but most of them are probably 2-5 thousand. I seem to be writing longer as I get older, not sure why… Generally speaking my short stories have a single narrative thread, which sometimes needs a bit of space to express itself, and sometimes delivers its message quite briskly.

You’ve had short stories published in anthologies, how did that come about? Did you have a suitable short to submit, or did you write something to order?
When I started submitting stories, there were ghost and weird anthologies coming out from mainstream publishers, like the Fontana Books of Horror, and it was sort of an obvious target, with a fairly broad remit. I’ve always written more ghost stories than other things, and I wasn’t aware of many other markets for those. Most of the anthologies I submit to now have narrower specifications, so I will generally write something to fit, unless it just happens that I have something appropriate – as happened, oddly enough, when someone announced an anthology of horror stories featuring potatoes. I’ve only once been approached for a story for an anthology, and sadly my contribution was rejected as being not scary enough.

Do you prefer writing science fiction or fantasy, or any other genre?
I like writing fantasy, and two of the four unpublished novels are fantasy; with the shorter stuff, it’s mostly ghost stories and weird shit, quite often with an inspiration from folklore or ballads. I blame it on reading M R James at an early age. As the collection demonstrates, I also write SF, fantasy, detective stories, and Westerns. And I write poetry.

Do you have any particular theme that you keep returning to?
Redemption. I write a lot about the strangeness under the surface, but I am generally trying to say something about people finding some kind of salvation, and meaning. This is sometimes at odds with the requirements of a horror story, but I don’t think it need be.

What’s your most recent publication?
I think my most recent story was in Shadmocks and Shivers, an R Chetwynd-Hayes tribute anthology from Shadow Publishing, in 2019. I also have a story in Sherlock Holmes and the Occult Detectives part 2, from Belanger Books, which should be out any minute.

What are you working on now?
Revising some old unsold stories to see if they can find a home; potentially working on the too-short novel to make it publishable; writing some short fiction on spec. I’ve also been revisiting my poetry – I always used to say that writing poetry is like being a manufacturer of high-class gas mantles, however good they are no-one’s going to buy them, but recently poetry seems to be having a bit of a come back, so who knows. 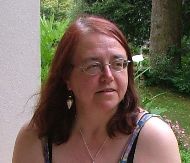 Story collection, Music in the Bone, is now available from Alchemy Press.

2 Responses to Interview with Marion Pitman