You know you’ve made it as an author when you’re asked the time-honoured question, “where do you get your ideas from?” There are various time-honoured responses, but Neil Gaiman in the link nails it.

In our recent house move I unearthed a very old notebook from the time when ideas just kept popping into my head. Some even made it through in recognisable form to publication. Most got no further than the notebook. The last of them is dated 3-5-93, and as I started writing His Majesty’s Starship in Christmas 1993, that means everything here predates my career as a novelist.

I will probably never do anything more with them and it would be cruel to consign them to my bedside drawer for another 23+ years, so, boys and girls and other, please feel free to pinch with my blessing.

Children born/bred in hyperspace as result of experiment to develop concepts for hyperspace travel – can’t cope with (or pose a threat to) men who come to rescue them. BRING IN MEMES & MIMETICS – hostile ideas and items picked up by children.

Accounts/investment manager for bloke who has deposited money and gone on a long space trip – plans to return & collect pooled-up interest. [I can’t claim credit for this, but this is similar to the origin of the AI Jane in Orson Scott Card’s Enderverse – a super-intelligent program develop to deal with the complexities of investments and index-linked pensions in a universe with time distorting relativistic travel.]

Boy at boarding school comes from the future … 3 or 4 years in the future is all. Some kind of time swap? No one believes him until at the end when his 13 year old self reappears. [I was on a roll. My one and only sale to Fantasy & Science Fiction (September 1997): “Pages Out of Order”, available in Jeapes Japes.] 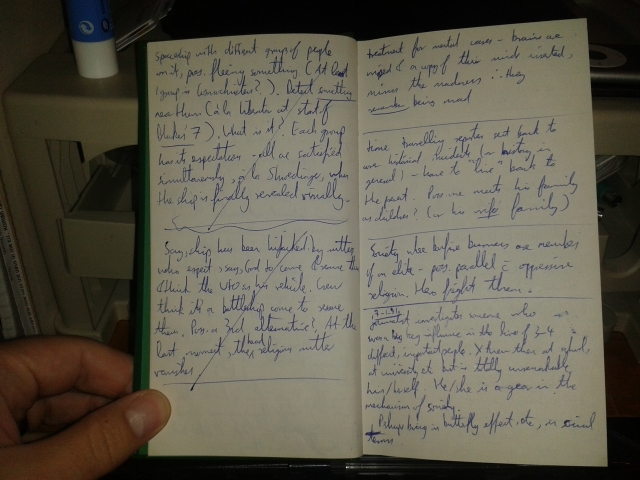 ‘Rights broker’ for different classes of being (e.g. human with genetic upgrades) – rights (to live, to work etc.) are treated as commodities.

Christian sets out to evangelise parallel worlds – maybe causes the Fall in one?

Village (à la Prisoner?) where people go to disappear – get absorbed into the timestream that suits them. Detective story? Fantasy?

Elite band of actors who can act anything (à la Songbirds of OS Card). Hero is ‘foreign to his own body’ (Oliver Sacks, Michael Flynn) and a great actor. Poss. setting – post-holocaust Europe (biological holocaust, not nuclear. Nanotech?).

Prayer book is in fact spell book in disguise. Belongs to young Salvation Army bloke? Ends up as poetry book? Baddy must also be disguised. [Hmm. Not dissimilar to an idea that ended up in The Comeback of the King.]

Child’s collection of cuddly toys have lives of their own. Eventually we learn it is the child’s subconscious psychokinetic powers moving them (poss. when he dies and they collapse?) Maybe they gang up on him to stop him growing up. Maybe an older brother went through the same thing. [“Getting rid of Teddy”, Interzone 76 (October 1993), available in Jeapes Japes.]

Spaceship with different groups of people on it, poss. fleeing something. (At least one group is Cosmochristers?) Detect something near them (à la Liberator at start of Blake’s 7). What is it? Each group has its expectations – all; are satisfied simultaneously à la Schrodinger when the ship is finally revealed visually. Say, ship has been hijacked by nutters who expect, say, God to come and rescue them and think the UFO is his vehicle. Crew think it’s a battleship come to rescue them. Poss. a third alternative? At the last moment, the head religious nutter vanishes.

Treatment for mental cases – brains are wiped and a copy of their minds inserted, minus the madness therefore they remember being mad.

Time travelling reporters sent back to cover historical incidents (or history in general) – have to ‘live’ back to the present. Poss. one meets his family as children? (Or his wife’s family.) [“Correspondents”, Aboriginal SF, Summer 1998, available in Jeapes Japes.]

Society where bonfire burners are members of an elite – poss. parallel with oppressive religion. Hero fights them.

Journalist investigates someone who was a key influence in the lives of 3-4 different, important people. X knew them at school, at university etc. but is totally unremarkable him/herself. He/she is a gear in the mechanism of society. Perhaps bring in butterfly effect etc. in social terms.

Correspondent gets himself imprisoned on a life sentence – the Home Time will have to get him out, or people will see him not ageing (at least, that’s his plan). [Definitely incorporated into Time’s Chariot.]

Time travel agency brings people to pre-AIDS times in order to get laid safely. Have to work out why they don’t pass on infection.

Youngster yearns to be a feelie-star (or whatever) – can’t break into it. His hero got into feelies when they started. Youngster works out that he is the star, time-travelled. MAYBE youngster grows up and matures. Sends tachyon signal (à la Timescape) back containing info to clone him from.

FTL has been invented recently. Someone works out that in C20 a Rama-type ship passed through the system undetected. It broadcast signals (e.g. the chaos number from Ian Stewart’s book) that have only recently been recognised as important. They were dismissed as static or whatever beforehand. Now we have FTL, we can go after this thing!!

Time travel – son takes his crippled Dad, who was a great sailor, on a C19 sailing ship as a treat.

Time travel – mother whose son has been taken away by social services for child abuse (real or imagined) is visited by the grown-up son.

First contact between invisible, mass-sensing aliens and humans, who can’t see them.

Scam – for some reason, guy pretends to be an AI.

Old-fashioned, clunking AI is found which can only communicate by icons, not sound.

Courtroom drama – a time traveller hops to and fro in time to create the required precedents to win a case in the present.

In SF, Earthmen make contact with less-developed aliens but still seem to deal with a worldwide society. In reality they would be dealing with one government amongst many. How about an alternate world where aliens deal with one country on Earth – a couple of centuries ago? E.g. America, 1776? Germany, 1914? [It turned out to be Cromwell’s England in 1645, in The New World Order.]

Man crashed on a far-off planet has to work out how to program ship’s computer to get back into space.

Man followed everywhere by ghost of 2-year-old toddler son (or not a ghost – he doesn’t have a son! Left over from temporal realignment …)

Aspects of a real person’s life are recorded in VR for other to experience. The real person (e.g. the Queen) doesn’t like it.

A time-travelling Red Cross, careful not to disrupt history but bringing relief to the wounded of historical battles. 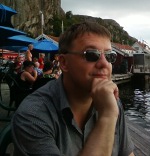 Ben Jeapes took up writing in the mistaken belief that it would be easier than a real job (it isn’t). Hence, as well as being the author of 7 novels and co-author of many more, he has also been a journal editor, book publisher, and technical writer. His first Milford was at Margate in 1991, which shows (a) how far Milford has come in the past 26 years and (b) qualifies him as a Great Old One, in Milford terms at least. www.benjeapes.com