Ghostly Services of the A1 by Kari Sperring

Posted on 29 September 2020 by Jacey Bedford 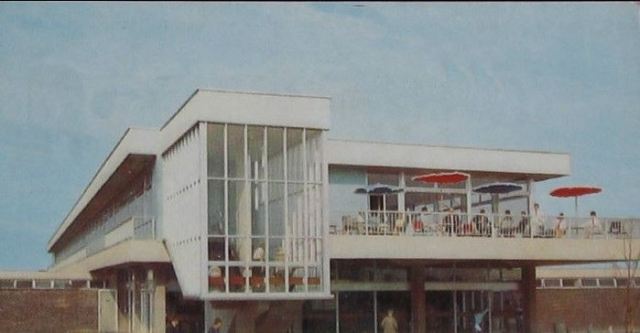 Leicester Forest East as was – on the M1.

Service stations have a weird place in my heart. When I was small, we lived quite a long way from the rest of our families, and as a result holidays were often spent driving cross country to visit aunts and uncles and grandparents. My father rarely stopped at services, as they were expensive, but I used to look out for them anyway. I loved the long narrow bridge that linked the two sides of Corley services on the M6, like one of the bullet trains I’d seen on Blue Peter. And I longed to sit one day and eat in the restaurant of Leicester Forest East, which was built right over the motorway. Further south near Huntingdon, on what was then the junction of the A604 and the northbound A1 was a services shaped like a flying saucer, which I was sure would one day take off to visit new planets. Service stations were exciting and alien, shaped like the future and I was sure they were a sign of things to come. It was the 1970s and I’d been woken in the middle of the night to watch men land on the moon. Later, N.A.S.A. named its first space shuttle Enterprise, and, devoted Star Trek fan that I was, I knew the United Federation of Planets was just around the corner. I was a bit worried about the Eugenics war and Khan Noonian Singh, but I knew we came out of that in the end and things got better. I knew the starship Enterprise was on its way, via Corley and Leicester Forest East and Huntingdon North. When, on a school trip, I found a copy of one of James Blish’s novelisations of Star Trek in the W H Smith at Watford Gap services, it felt like a sign. 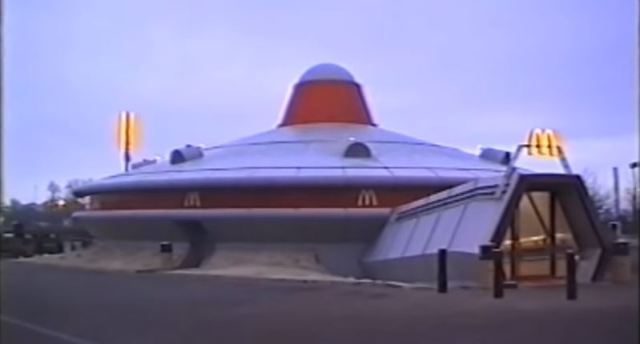 The Flying saucer services at Alconbury

My whole life, I have loved to travel. New places tell new stories and open up new possibilities. The future is everywhere around us, encoded in neon and wood and metal and stone and thought and idea. Childhood television – Blue Peter  and Tomorrow’s World – showed us the routes opening up ahead. Today, by Vauxhall Cavalier to Corley. Tomorrow, by interplanetary bullet train to Callisto Ice Prime. The day after? The Enterprise, and breakfast at T’Phani’s. Those strange-shaped buildings, those bullet trains and suspended restaurants and flying saucers-in-the-basket, were symbols born from dreams. 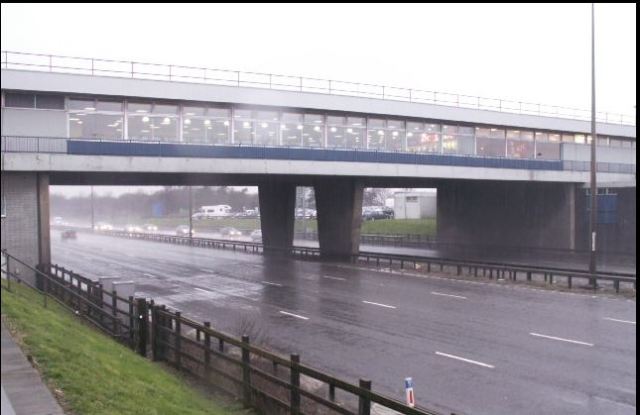 Fast forward, and I am driving north from Cambridge, where I now live, past the ghosts of services past. Corley is still there: I used to stop at it regularly when I worked in Wales, and I still watched out the bridge, I no longer walked over it. I had finally achieved my ambition of eating over the M1 at Leicester Forest East and even managed to get a window table. The windows were dirty and hard to see through, the motorway queueing in both directions, the food bland. This was Britain in the 1990s, tired out and disenchanted, taught by neo-liberalism to look down, not forward. Tomorrow’s World was history, though Blue Peter soldiered on. Passing Huntingdon, I no longer look for the flying saucer. It’s long gone, knocked down to make way for the new, wider A14. Further up, the Little Chefs are gone, turned into US franchises, or, up near Grantham, a sex shop. Who stops there, breaking their journey to stare at dildoes and DVDs? Who, and why? It seems like a strange location, but it’s survived for over a decade, longer than the restaurant it replaced. If I want a break, I get off the main road, these days, and look for a pub with food. The bathrooms are usually nicer, the food way better, and there are no more of those alluring cherry pancakes and refills of coffee with which Little Chefs welcomed wet bikers. The franchises aren’t sure about me and Phil, when we stop with the bike, unlike the Little Chef at Marston Moretaine, which always gave us a large table for our panniers, and brought coffee with the menu. That one is still there, and I pass it occasionally. Next time I pass, I’ll wave, in memory of those pancakes, and also to Captain-Colonel Sir Tom Moore, the man who raised the NHS funding our government refused. Further north on the A1, services grow scarce and I worry for the truckers who plough their way back and forth, up and down. I see them parked up to sleep and eat in laybys, and I wonder when it became acceptable to shut them out.

Because those old services, Corley and Watford Gap and Doncaster South, were democratisers. Anyone could use them, anyone at all. Lorry drivers and families, bikers and coach trips of seniors, battered old Ford Escorts and brand new top of the range Rovers: all of them were there. My uncle, in his year as Lord Mayor of Coventry, once parked the mayoral Rolls at one. With their strange imaginative beautiful-ugly shapes, they imagined the future while feeding us egg and chips. They, like us, were travelling forward.

They, like us, look worn these days. The shapes are retro, shabby and cracked. That future is done, replaced with the machinery of capitalism, of logos in space and privatisation. Food has always shown class divides but the division is more clearly illuminated now. The rich don’t stop at services, or, if they do, send their people to clear the bathrooms and buy wine and smoked salmon sandwiches at Waitrose. For the rest of us, there’s franchise burgers and a queue. And for the truckers, who drive our food and goods? A fry-up in a portacabin that shakes as the traffic roars by. 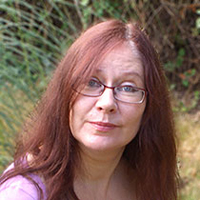 Kari Sperring is the author of two novels (Living with Ghosts [DAW 2009] and The Grass King’s Concubine [DAW 2012]. As Kari Maund, she has written and published five books and many articles on Celtic and Viking history and co-authored a book on the history and real people behind her favourite novel, The Three Musketeers (with Phil Nanson). She’s British and lives in Cambridge, England, with her partner Phil and three very determined cats, who guarantee that everything she writes will have been thoroughly sat upon. Her website is http://www.karisperring .com and you can also find her on Facebook.

2 Responses to Ghostly Services of the A1 by Kari Sperring