2) What’s the Story? by Colin Brush 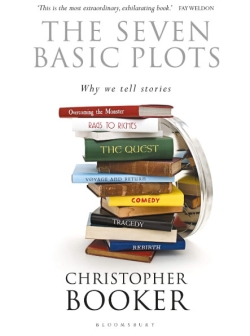 ‘Transported to a surreal landscape, a young girl kills the first person she meets and then teams up with three strangers to kill again.’ TV review of The Wizard of Oz

Before we put pen to paper and write our blurb we need to make a couple of decisions. The first is what kind of story it is we are pitching. The second is deciding who the book is for – who is its audience? (This will be the subject of the next post.)

The question of the story is in some ways the easiest and the hardest. We’ve likely already written the story so we know what it is about. But now we must decide what kind of book it is we are blurbing. (Note I used the word decide not divine: it will be a decision.) I don’t mean deciding whether it is science fiction or fantasy, crime or historical or any other bookshop genre. No, if we are going to pigeonhole our book we are going to do so with style.

When I say we must work out what kind of story it is I mean ask yourself which one of the great plots it is. Romance? Tragedy? Quest? Rags to riches? Overcoming the monster? Voyage and return? Or rebirth? These are the seven great plots in the world of story. (Naturally, there is some debate over these plots, with the numbers dropping to two and rising to thirty-six by some accounts. It doesn’t matter what version you choose, just so long as it is clear to yourself and thus to your potential reader.) These plots we may understand intuitively as authors but they are also recognised (even if just unconsciously) by our readers. And this is the point. They are universal. They straddle genres. We know what to expect from them and so they tell us what kind of story we are dealing with. This is as important for readers as for writers.

Of course, your story may feature elements or the entirety of more than one of these plots. It’d be surprised if it didn’t. But when you are writing a blurb it is wise to focus on only one story plot. In my experience blurbs that feature more than one story thread read rather knottily: a tangle of characters and motivations that it takes a few readings to decipher. More to the point, the less clear to a reader what kind of book it is they are holding in their hands, the less likely they are to remain holding it for long. Watch people in bookshops. They rarely spend more than thirty seconds perusing a blurb – if they read all of it at all (a big if) then mostly they do so only once.

So at this point you must decide which of your plots is the one that works best as the backbone of your blurb. It is worth writing down your various options. In making these distinctions and decisions you may also find that you are already starting to shape the writing of your blurb.

For example, if we have a tale exploring the doomed affair between an immortal human and a dying Martian, we could perhaps pitch it as a romance or a tragedy. To pitch it as a romance we might lead our blurb with the beginning of the affair. If instead we think a tragedy is truer and thus has a greater appeal then we may prefer to begin with its heartbreaking end.

How about the story of a child who unites the tribes struggling in the ruins of an ancient empire only to find her rule as Queen threatened by the return of a forgotten evil? A rags-to-riches tale would focus on the child-queen’s journey. A quest story would concentrate on the problems of uniting these disparate tribes. Overcoming the monster would dwell on the forgotten evil.

Or what about the protagonist who sacrifices all they hold dear to discover the truth of their origins, only to learn it was benignly buried in their genes all along, just waiting to be discovered? Is this a voyage and return story, or one of rebirth?

Whichever you choose will dictate how you frame and structure your blurb (more on this in a later post).

I am not saying that choosing a story type precludes you from using details that do not fit your chosen story. What I am saying is once you’ve chosen a story type, you should remain true to that story and find a way of accommodating the other elements into it. Your blurb should be pulling in one direction, making clear what kind of story this is.

Why? In part because different people are drawn to different types of story (more on this in my next post). They like to know what they are going to be reading. Many readers are not eclectic in their tastes and know exactly what they want. They have a multitude of desires and the blurb’s job is to attract the subset of those competing desires which the book will most satisfy.

But the truth is that if it is not clear to the reader what kind of book it is – let me say again we’re not talking vampire, wizard, dragon or rocket ship signifiers, we’re talking universal story roots – then our lack of clarity is at best going to confuse them and at worst to actively turn them off.

Lastly, knowing the kind of story we’re pitching tells us how to structure and write our blurb.

But before we get to that we need to think a little bit more about our audience.

Colin Brush has been writing book blurbs for twenty years. At some point he may consider switching from scribing the outside of book cover to penning the words inside.

2 Responses to 2) What’s the Story? by Colin Brush