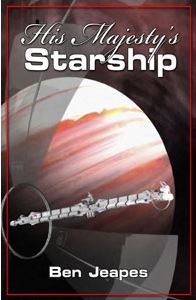 Go to the book’s home page

Slowly but surely His Majesty’s Starship approached completion … and approached it … and approached it. For a very long time indeed I was almost there, with just a couple of thousand words to go, and I simply wasn’t writing them. I self-diagnosed the problem, which was that I had a life and I was unwilling to lose it. The solution was to start getting up earlier, writing before going to work. It’s a habit I’ve kept.

Placing it with a publisher was quite atypically easy. Two friends from my writers group already shared an agent, Robert Kirby. Robert had been sufficiently tickled by their descriptions of the group to ask if he could have first refusal if any of the rest of us ever wrote a novel. I sent His Majesty’s Starship to him in August 1995, shortly before the Glasgow World SF Convention, which was my first worldcon. He finally accepted it, and me as a client, in January 1996. I had an agent! For a while I enjoyed dropping the words ‘my agent’ into conversation with friends, family and strangers.

(I recently came across an old letter from Robert thanking me for introducing him to his latest client, one Alastair Reynolds. Purveyor of retirement plans to agents, that’s me. No finder’s fee, sadly.)

And then Scholastic expressed an interest in it.

Robert’s precise reason for sending the book to Scholastic was, and I quote, “Gilmore seemed to me a sort of modern day Biggles and the level of sex and violence would not have raised the collective eyebrow of readers of Captain W.E. Johns.” As Gilmore, in the draft he read, was a divorcee from a group marriage with a teenage son, and there is an alien sex scene in chapter 16, I disputed this point of view, but it’s amazing the effect having a publisher actually express interest will have on you.

Further, I had been put off Scholastic by hearing horror stories from a friend who had had a novel published by their Point SF imprint which was systematically neutered to make it suitable for a young audience. (Or rather, one suspects, for the young audience’s parents.) The approaching middle age, divorced heroine became a teenager. At one point, in the original draft, she comes down first thing in the morning and finds the boyfriend having breakfast, with the implication he had stayed overnight; now he had to walk up the garden path first thing in the morning and ring the bell to be let in.

I don’t know who edited that book but it certainly wasn’t Scholastic’s David Fickling, a boundlessly cheery Roy Hudd lookalike and publishing genius. (All my writing breakthroughs seem to be thanks to someone called David: Fickling, Pringle, Barrett …) Practically my first card on the table when I met David was that the alien sex scene stayed. “Absolutely,” he said cheerfully. I was to learn he said a lot of things cheerfully, including his careful enumerations of your novel’s precise faults.

David was the man who had signed Philip Pullman (Northern Lights had just won the Carnegie Medal for children’s fiction) and was looking for something meatier than Scholastic’s usual teen fare for a new imprint. Robert forewarned me that David thought the book was bogged down with too much detail. I went into the meeting determined to refute this viewpoint and I left agreeing with him. I also saw how it took far too long for the story to get going, and it finished too soon – about three quarters of the way through the book, with a lot of mopping up after. I needed to rewrite it so that it ended at, you know, the end.

The kicker was: if David suspected for a moment that I was just agreeing with him to get the book published, rather than rewriting with my heart in it, he wouldn’t be interested. Not that I would have just agreed with him to get it published … but it concentrated the mind.

This began the first of quite a few rewrites: new opening chapter, throwing us straight into the action and highlighting Gilmore’s tactical ability. A space battle, a few people killed. All good stuff. I sent off the rewrite.

Early 1997: he didn’t like it. I began to see the problem: I had added more plot but left the excess verbiage in as well. David did me a huge favour for life at this point by recommending that I read Patrick O’Brian’s Master & Commander, first of the Aubrey series. O’Brian’s characters just slide into the action: Aubrey has been through some considerable scrapes prior to the novel’s opening and we only hear about these second-hand.

I applied this to the novel and I cut out anything that didn’t directly relate to the action, including (though it broke my heart) chapter 8, in which the Rustie Arm Wild interviews the crew. That chapter was the key one to introducing not only the crew but also the alien mindset to the reader. The novel was now down to 92,000 words, from its first draft of 113,000.

Back to Scholastic, and David courted death with a casual comment along the lines of: “don’t I remember a chapter where Arm Wild interviews the crew? I quite miss that …”

I restrained my homicidal impulse and learnt the lesson: anything that develops the characters is probably acceptable, even if it doesn’t contribute to the action. The interview was reinstated.

In January 1998 I sent in the final draft at 100,000 words, and it was accepted. And despite all the twists and turns over the last two years, it really was the story I originally wanted to tell.

I was struck by all the pluses of dealing with David, as opposed to the horror stories I had heard of other publishers: incompetent editors who want to be writers themselves and fiddle at every stage; who have no idea of science fiction beyond Star Trek; who bow to the High Priests of Marketing and tell you to put the sex here, the extra 200 pages there, and where’s that dragon when we need it? And all for a product that ultimately will have a life expectancy that makes a mayfly seem pensionable, because that’s how the bookselling system works. (Note: further on and many years later, I still have yet to meet any editors who match this stereotype … but I was young then and, like it or not, the stereotype exists.)

I was bowled over by an editor who encouraged me to cut. Not willy-nilly, but surgically. Cut this, yes, but expand that, because you leave off just when the reader’s getting interested … you see? And yes, I did see. David never lifted a finger to fiddle with the science fiction – that was entirely my own. He just concentrated on the story, and I came out the other end of the process a convert to the demands of children’s publishing: proper children’s publishing, not plot lobotomy as is sometimes practised. Just tell the story, then stop. That’s it. No more. Let it be as long as it needs to be. And you end with a story to be proud of: the story you wanted to tell.

I still had to stay on my toes. There were those within the Scholastic empire who clung to the old ways and David couldn’t control everything. Like, a frowning copy editor changed one character’s “Sod it!” to “Damn it!” We compromised on “Nuts!” (I had a vision of the guy wandering the corridors of their offices in New Commonwealth House muttering “Sod it / damn it / nuts / sod it / damn it / nuts …”, perhaps looking to see which of his colleagues swooned at what.) Strangely, the occasional utterance of “Christ!” caused no upset at all; a sad reflection etc. etc.

The learning experience continued right up until the end. At proof stage, I was told it was one signature too long for its price range. Books are typically printed in multiples of sixteen pages – eight pages get printed on either side of a large sheet of paper which is then folded and trimmed. That is a signature. My choice was: cut it by sixteen pages, or let Scholastic put it up by a pound. I cut the sixteen pages. It’s humiliating to realise your book has sixteen dispensable pages in it, but it was an invaluable exercise.

His Majesty’s Starship was published in December 1998. My author copies were delivered while I was at work on the last working day before Christmas, so I had to go and collect them from the depot. As I drove away from the depot, with the holidays ahead and my first novel in the boot of my car, the radio announced that Peter Mandelson had resigned from the cabinet. And then it played the third part of Vaughan Williams’s English Folk Song Suite, a piece of music I really enjoy with a triumphant trumpet fanfare.

I was pretty pleased with myself and with life generally.

It enjoyed modest success and some fairly nice reviews: I still relish the tingle when I saw SFX had awarded it more stars than the other book on the same page, a Star Trek: Voyager novel. It went out of print in 2002. A few years later I did a print-on-demand version because I was still getting a trickle of enquiries. And then I heard my friend Cheryl Morgan was starting a new e-book publishing company …

Andy Bigwood did an awesome cover for it – see above. It’s now available as both software and treeware (i.e. e-book or print).  The original Scholastic edition was also published in America under the utterly baffling title The Ark … presumably as in Ark Royal, and in deference to the United States’ anti-monarchical past, and because if you want an exciting novel about starships, obviously you go for one named after a big wooden boat. But that is out of print too, and the only edition available anywhere for new has the right title. The one God intended. His Majesty’s Starship.

Ben Jeapes took up writing in the mistaken belief that it would be quite easy (it isn’t) and save him from having to get a real job (it didn’t). Hence, as well as being the author of several novels and short stories, he is also an experienced ghostwriter, journal editor, book publisher and technical writer. His novels to date are: His Majesty’s Starship; The Xenocide Mission; Time’s Chariot; The New World Order; Phoenicia’s Worlds; The Teen, the Witch & the Thief; The Comeback of the King; and H.M.S. Barabbas. His short story collection Jeapes Japes is available from Wizard’s Tower Press. He is now a fulltime ghostwriter, writing stuff for other people which annoyingly makes more money than his own does.

2 Responses to His Majesty’s Starship, part 3: a bloody children’s publisher? – by Ben Jeapes