Worldcon is BIG, with thousands of fans, authors, publishers and industry professionals and an enormous choice of panels, events, readings, kaffeeklatsches, signings, book launches, and, of course, the big events like the Hugo Awards ceremony (Sunday night) and the Masquerade (Saturday night). I went to the Hugos, but not the Masquerade as that was the night my publisher (DAW) had a dinner for DAW authors (DAWthors?).

Okay, starting at the beginning.

I flew into Dublin on Tuesday morning and met up with Carl Allery at Dublin airport. (Tina Angelatos joined us on Thursday.) It still being early, we dumped our bags in the hotel lock-up and did the Hop-on Hop-Off bus tour without hopping off. It was really just to say we’d done it, since we knew we wouldn’t be taking time for tourist stuff.

Arriving early gave us the opportunity to check into the convention on Tuesday night with no queues. The folks who checked in on Wednesday and Thursday weren’t so lucky. The Convention Centre Dublin (CCD) is a spectacular building both from outside and in. 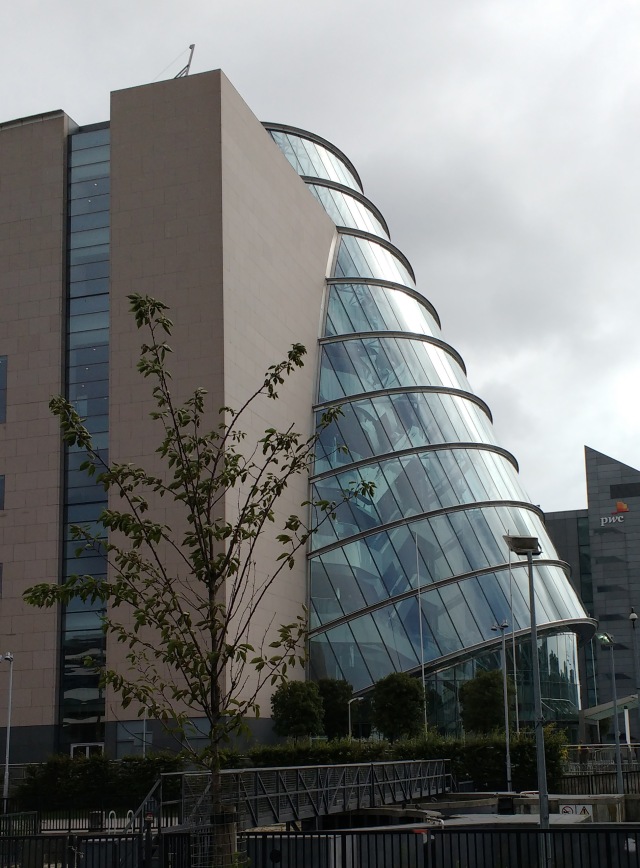 The huge tilted atrium hides a sequence of escalators that reach up so high, you’re almost into nosebleed territory. 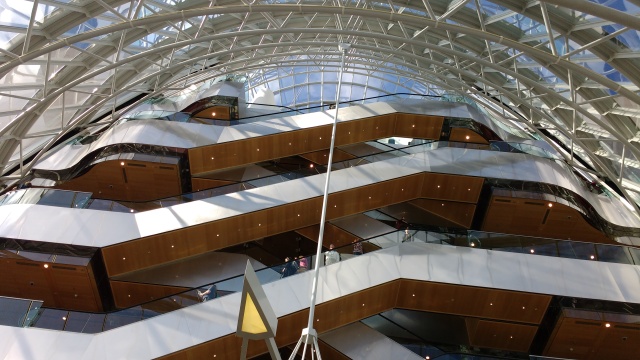 On this occasion I’d booked a table for Milford SF Writers, to promote the Milford Conference, workshopping week, the Writers’ Retreat and our bursaries for writers of colour. I’d managed to order a mini pull-up stand which fitted into my suitcase. Though I have to say that stand and glossy leaflets weighed my luggage down somewhat. We set it up on Wednesday morning before the con got underway. 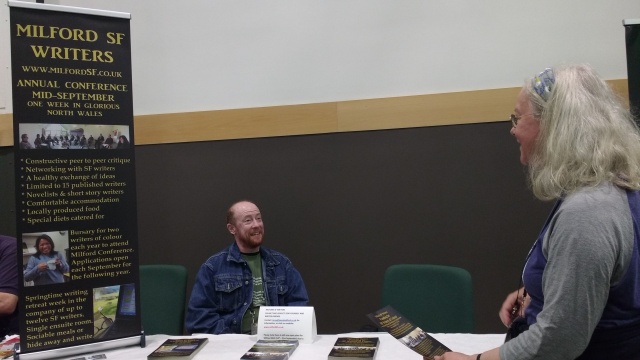 If I had one criticism of the event it was the amount of queueing for EVERYTHING. Queues for panels, queues for tickets (free) for events with limited space. Not everyone who wanted to could attend the Hugos, so tickets became available at 1.00 on the day of the event. That meant that I didn’t get into the panel I wanted to see that also started at the same time. By the time I collected my tickets and got to the panel, hoping to slip into the back of the room, it was full.

Having the Milford stand did give Carl, Tina and I somewhere to retreat to when the crowds became overwhelming, and we spoke to quite a few potential Milford attendees. Milford is always sold out, but it’s nice to have some new faces there.

I attended some good panels, though I’m not going to list them all. Special mention for a late addition to the programme – ‘Writing Thomas the Rhymer: balladry and storytelling’ with Ellen Kushner, which turned out to be half talk and half Ellen singing some of the ballads that inspired her. I’m a sucker for ballads.

Friday was my day for doing panels rather than attending them. I had three panels all at the Point – one stop away from the Convention Centre on the Luas Red Line. There were panel rooms in the Odeon and in the Gibson hotel next door. Hopefully they sorted out their queueing failures as the weekend wore on, but on Friday the queues were such at the Point Odeon, that people who had arrived in plenty of time didn’t get into the panels until ten minutes after the start time. Since panels MUST finish ten minutes before the next panel is due to start, that cut down a 50 minute panel to 40 minutes.

On Saturday I spent more time on the Milford stand, had lunch with a friend from Australia and managed to miss most of the panels I’d intended to see because I couldn’t face the queues and also because I spent time with friends. Saturday evening was the DAW dinner with editors Sheila Gilbert and Betsy Wollheim, plus authors including Kari Sperring, Seanan McGuire, Joshua Palmatier, Pat Rothfuss and Michelle Sagara/West. Great company and delightful food at the Ely Wine Bar. 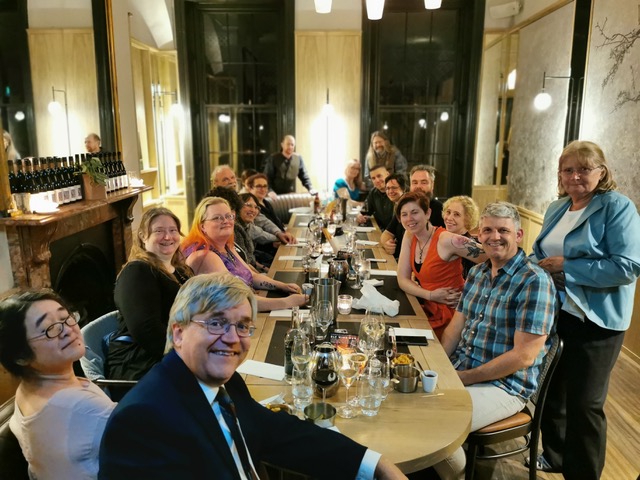 On Sunday my favourite panel was: An army marches on its stomach, an empire on its gold. Fantasy economics. I even took NOTES!

And then in the evening we attended the Hugos in the CCD auditorium. A posh frock event for some and casual for others. It didn’t matter, everyone enjoyed it. I hadn’t voted in every category, but it was interesting to see how my votes stacked up against the winners. My editor, Sheila Gilbert was once again up for Best Editor, Longform, but since she won it last year, she was sure she wouldn’t get it this year. Some people accepted their award gracefully, their speeches short and sweet. Others were witty and charming. One delivered a political rant. (Mentioning no names but there has been an extensive discussion on Facebook.) To me the style of delivery overshadowed the heartfelt meaning behind it. Sometimes it’s not what you say, but how you say it. (The print version reads well.) But all-in-all it was a lovely evening, and a great way to end the con (for us). 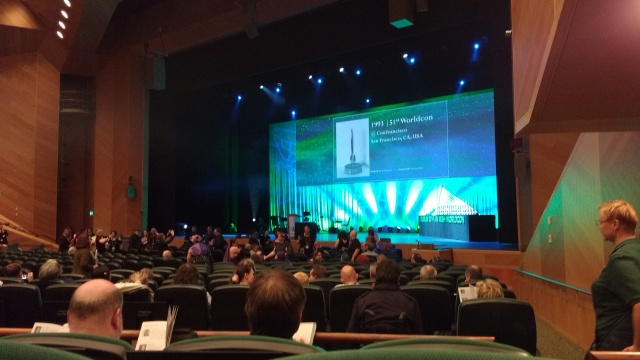 The CCD auditorium, filling up for the Hugo Awards

The event went on into Monday, but Tina had to leave on Sunday, and Carl and I had booked return flights for Monday early afternoon, so with check-in times, we were heading for the airport by 11.00.

During the con we managed to have a semi-official Milford Meet (in the bar, of course). Not everyone could make it at the same time but we kept running into each other at panels, and having the Milford stand gave us a good place to congregate. Milford is a haphazard, constantly shifting family of writers. Namechecking: Charlie Stross, Steph Bianchini, David Allan, Phil Suggars, Carl Allery, Tina Anghelatos, Jaine Fenn, Tiffani Angus, Steve Kilbane, Kari Sperring, Catie (C.J.) Murphy, Nick Moulton, Sarah K Ellis, Roseanne Rabinowitz, Juliet McKenna, Mihaela Perkovic, and Juliet Kemp. I missed Chris Butler, Karen Brenchley (apart from a quick wave) and Val Nolan… though in those crowds, I’m not entirely surprised. Now, who did I miss out? I only spotted George R.R. Martin from a distance.

I hope Glen Mehn was with us in spirit. His name appeared on the Roll of Honour, those Worldcon attendees and writers who left this earth in the past year. RIP, Glen.

Next year’s Worldcon is in Wellington, New Zealand. I’ve already bought my membership.