The Ghost Story Festival was small and intimate event and the focus was on supernatural fiction and ghostly tales rather than SF. But along with the contrasts there are also continuities. First, genres and readership tend to overlap in the broad realm of speculative and strange fiction. And foremost, the common thread through both of these events is Dublin and its rich heritage in the speculative and the supernatural. I look forward to visiting this city again to talk about weird stuff!

This is an edited version of a post I published in July 2018 on my own blog. If you’d like to visit the post in its original habitat you can find it here.

The Dublin Ghost Story Festival was hosted by Swan River Press, an independent local publisher specialising in gothic, supernatural and fantastic literature, with an emphasis on Irish authors. The event featured panels, talks and readings that explored strange and uncanny fiction.

Before 2018 I last spent time in Dublin in 2004 when I came for a May Day weekend of anti-capitalist demonstrations. This was back in the era of ye olde Celtic Tiger so I was expecting things to look a little different. As my coach made its way through Dublin city centre from the airport I recognised a few places, even a glimpse of the community centre on Cathal Brugha Street where we met up and hatched plans and it’s where some of our soggy minions returned after getting water-cannoned.

Then I was greeted by the fine sight of rainbow flags flying from the historic General Post Office, which had also been a meeting point for some of the 2004 events. I’d forgotten that it was Pride weekend in Dublin, so I was surprised and delighted by the rainbow bunting up all over the city. Though I was absorbed in matters ghostly and didn’t make it down to the parade itself, the Pride paraphernalia and revelry gave me the sense I was visiting a city shaking off the shackles of the past just after the pro-choice victory in the 8th amendment referendum.

There were also some reminders of the old order.  Jesus presided in this glass booth in a small square near our B&B. Perhaps I missed something, but he just appeared to be part of the street furniture and not connected with any religious institution.

Though I enjoyed Helsinki’s massive World Con in 2017, I was looking forward to a much more intimate event this time around. It made a nice change to have only one stream of programming. Everyone went to the same events and hung out in the same venues afterwards. With the programme finishing around 7.30pm, no one had to worry about their 8pm panel or a late reading where you hope your audience will be merrily inebriated rather than snoring. It was a nice change to be able to relax with our dinner or drinks.

The event was held in the Grand Masonic Lodge of Ireland, which boasted plush decor, stained glass windows and a collection of rather alarming portraits of eminent masons. The programme featured readings and panels on many facets of supernatural and weird fiction. Guests of honour included Joyce Carol Oates, Lisa Tuttle, Victoria Leslie, Andrew Michael Hurley, Helen Grant, Reggie Oliver, RB Russell, Rosalie Parker and Nicholas Royle. I was pleased to meet Nick Royle for the first time; along with Joel Lane he was a big influence on me in the 1990s when I first discovered that thing called ‘slipstream’.

At one panel someone asked whether there’s a place for humour in a ghost story. The response was ‘yes, but it’s difficult’. And when Joyce Carol Oates read her story “The Crack” an even more emphatic YES came to my mind. The story is both poignant and funny as it lampoons the denizens of a high-rise faculty apartment building near the New York University campus.

On the Saturday Lisa Tuttle also did an in-depth interview with Joyce Carol Oates. You can see them chatting in the photo below under the watchful gaze of some very stern gentlemen.

It’s a shame that I didn’t get better photos of the portraits because many of us began to feel on very familiar terms with them, as you can see from the tweet.

I was a kid when Joyce Carol Oates shot to prominence after winning the National Book Award for Them. I ended up reading this book semi-surreptitiously along with The Exorcist and the first two chapters from the library copy of Gravity’s Rainbow that I carried around with me but never ever finished.

My mother periodically tut-tutted over the New York Times Book Review when a new Oates book appeared: “That woman writes about such awful things.”

Of course, that was all the more reason to acquaint myself with the work of ‘that woman’. I started with Them, a gritty account of the lives of a poor Detroit family amid the riots of 1967. I was introduced to Oates’ work as a realist, so I was later amazed to discover her supernatural and gothic fiction such as Bellefleur.

However, few people are able to keep up with Oates’ massive output. According to her bio in the festival programme, she has written over 50 novels and produced volumes of short stories, novellas and non-fiction. For more information you might want to check out the Celestial Timepiece  website, which is devoted entirely to her work.

While I was at the Ghost Story Festival I bought A Book of American Martyrs, which I’ve been wanting to read for a while. I also had it signed – so witness my fangirl moment of the weekend below!

These are a few quotes that stood out for me from Oates: “I don’t believe in any ghosts but I believe that other people believe in them… but what do ghosts do when they’re waiting for you to come to the place they’re haunting? Are they playing cards? And who launders the sheets?”

And while Oates doesn’t believe in ghosts, she believes in their importance as “a triumph of the spirit over the material”.

At one of the early panels I also enjoyed the following conversation about Lovecraft. Reggie Oliver: “I don’t go for all those tentacles. It’s a question of taste.” Joyce Carol Oates: “The best age to appreciate Lovecraft is about 12.” When I tweeted this exchange I had a comeback from someone who said they started to appreciate Lovecraft at the age of 45. I can see that point too. While I share Reggie’s tiredness of tentacles, I can still appreciate a good atmospheric Mythos tale.

Reggie Oliver also nailed it when he said:  “A ghost story should contain a revelation rather than an explanation.” It expressed my discontent too with anti-climactic endings that explain too much and tie everything too neatly as well as endings that lack any kind of closure. How does a writer steer between the two?  Perhaps a revelation heralds the kind of closure that deepens rather than dispels the mystery.

The event ended with a panel where Lisa Tuttle, Helen Grant and RB Russell discussed overlooked favourites. I was pleasantly surprised when someone mentioned Ethel Mannin and her 1945 novel Lucifer and the Child, which is about a poor girl in the East End of London who believes herself to be a witch. Mannin was a journalist, anti-fascist organiser, a comrade of Emma Goldman and possible lover of WB Yeats. She might have published over 100 books in her lifetime. The little I’ve known of her always fascinated me. I recall reading another novel from her called Venetian Blinds, which explores the price of upward mobility.

And this brings me to the finale of the weekend, when I learned about another ‘lost’ woman writer who was influential in her own time but not so celebrated today.

On the Monday after the festival we visited an exhibition about the prison writings of Dorothy Macardle, which had been recommended by Swan River Press. Macardle was an activist and historian – and a writer of supernatural fiction. She was involved in the Irish independence movement and she was working on a paper called Irish Freedom when she was arrested during the civil war. She served six months in Mountjoy and Kilmainham until her release on health grounds. However, she came to have serious disagreements with the prominent men in Irish politics.

While imprisoned Macardle wrote a book, Earth-Bound: Nine Stories of Ireland, which is a collection of ghost stories inspired by the women that she met in prison. I’ve often encountered a view that supernatural/strange fiction is escapist and backward-looking, but books like this show that’s far from the truth. Ghost stories – and the weird and esoteric in general – offer a powerful way to highlight historical and personal struggles and create fictional connections through time and space. That’s certainly the impetus behind the stories in my collection Resonance & Revolt. So while I indulged in a chuckle over the thought that I came to Dublin in 2004 to take part in an international anti-capitalist convergence and this time I went there to talk about ghosts, it doesn’t mean that the two are opposed – neither does it necessarily mark the softening that is said to come with age!

Each of the nine ghost stories in Earth-Bound is dedicated to a fellow prisoner, who are all featured in the exhibition. Some of the ghost stories in Earth-Bound incorporate Celtic myth, while others are set against the backdrop of the Irish independence struggle. One tells of a contemporary Irish revolutionary who is haunted by the ghost of a prisoner from the 1798 Rebellion. Pictured left is the knife and spoon that prisoner Eithne Coyle took with her when she escaped with three other women from Mountjoy in 1922. 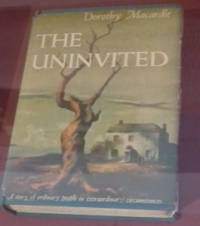 Macardle went on to write more supernatural fiction, including a novel about a haunted house that was later made into the Hollywood film, The Uninvited. She also led the Women Writers Club in 1933. It’s possible that she might have even known Ethel Mannin, since the Women Writers Club had presented Mannin with its award in 1948 for her bestselling novel Late Have I Loved Thee.

My visit to this exhibit was a perfect way to end our weekend in Dublin.

Now I’ll say that while I enjoyed the intimate atmosphere of the Ghost Story Festival, I’m looking forward to doing it large again. So roll on World Con in Dublin 2019!

Rosanne Rabinowitz’s collection Resonance & Revolthas been shortlisted for the 2019 British Fantasy Award and is published by Eibonvale Press. Her novella Helen’s Story, which was nominated for the 2013 Shirley Jackson Award, is available from Aqueduct Press. Her latest short story appears in the anthology Pareidolia, published by Black Shuck Books (https://blackshuckbooks.co.uk/pareidolia/). She lives in South London, where she engages in a variety of occupations including care work, copywriting and freelance editing. She spends a lot of time drinking coffee – sometimes whisky – and listening to loud music while looking out her tenth-floor window.
Blog: rosannerabinowitz.wordpress.com
Twitter: https://twitter.com/RoRabz

Resonance & Revolt and Helen’s Story are both available on Kindle. You will be able to find them at World Con at the Swan River Press stall.