Great news. NASA has a treat for you. They have made their entire collection of images, sounds, and video available and publicly searchable online. It’s 140,000 photos and other resources available for you to see, or even download and use it any way you like. Yes, copyright-free. For those of us who blog and write, this is a gift!

Here are some samples that took my fancy. You might lose a day to this website, or even more, but it’s so worthwhile for story ideas and illustrations. Enjoy.

NASA image release April 22, 2010 NASA’s Hubble Space Telescope captured this billowing cloud of cold interstellar gas and dust rising from a tempestuous stellar nursery located in the Carina Nebula, 7,500 light-years away in the southern constellation Carina. This pillar of dust and gas serves as an incubator for new stars and is teeming with new star-forming activity. Hot, young stars erode and sculpt the clouds into this fantasy landscape by sending out thick stellar winds and scorching ultraviolet radiation. The low-density regions of the nebula are shredded while the denser parts resist erosion and remain as thick pillars. In the dark, cold interiors of these columns new stars continue to form. In the process of star formation, a disk around the proto-star slowly accretes onto the star’s surface. Part of the material is ejected along jets perpendicular to the accretion disk. The jets have speeds of several hundreds of miles per second. As these jets plow into the surround nebula, they create small, glowing patches of nebulosity, called Herbig-Haro (HH) objects. Long streamers of gas can be seen shooting in opposite directions off the pedestal on the upper right-hand side of the image. Another pair of jets is visible in a peak near the top-center of the image. These jets (known as HH 901 and HH 902, respectively) are common signatures of the births of new stars. This image celebrates the 20th anniversary of Hubble’s launch and deployment into an orbit around Earth. Hubble’s Wide Field Camera 3 observed the pillar on Feb. 1-2, 2010. The colors in this composite image correspond to the glow of oxygen (blue), hydrogen and nitrogen (green), and sulfur (red). Object Names: HH 901, HH 902 Image Type: Astronomical Credit: NASA, ESA, and M. Livio and the Hubble 20th Anniversary Team (STScI) To read learn more about this image go to: <a href=”http://www.nasa.gov/mission_pages/hubble/science/hubble20th-img.html&#8221; rel=”nofollow”>www.nasa.gov/mission_pages/hubble/science/hubble20th-img….</a> <b><a href=”http://www.nasa.gov/centers/goddard/home/index.html&#8221; rel=”nofollow”>NASA Goddard Space Flight Center</a></b> is home to the nation’s largest organization of combined scientists, engineers and technologists that build spacecraft, instruments and new technology to study the Earth, the sun, our solar system, and the universe.

iss059e072234 (May 23, 2019) — Expedition 59 Flight Engineer Commander Oleg Kononenko (left) and Alexey Ovchinin ready a pair of Russian Orlan spacesuits inside the Pirs docking compartment’s airlock. Ovchinin and Kononenko are due to conduct the fourth spacewalk of 2019 for space station maintenance on May 29. 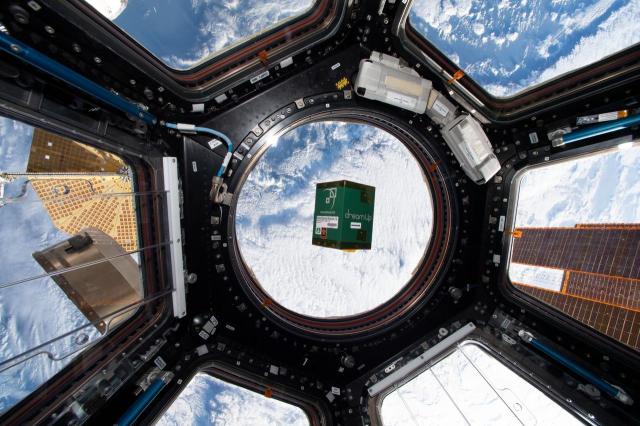 Astronomers are using the NASA/ESA Hubble Space Telescope to study auroras — stunning light shows in a planet’s atmosphere — on the poles of the largest planet in the solar system, Jupiter. This observation program is supported by measurements made by NASA’s Juno spacecraft, currently on its way to Jupiter. Jupiter, the largest planet in the solar system, is best known for its colorful storms, the most famous being the Great Red Spot. Now astronomers have focused on another beautiful feature of the planet, using Hubble’s ultraviolet capabilities. The extraordinary vivid glows shown in the new observations are known as auroras. They are created when high-energy particles enter a planet’s atmosphere near its magnetic poles and collide with atoms of gas. As well as producing beautiful images, this program aims to determine how various components of Jupiter’s auroras respond to different conditions in the solar wind, a stream of charged particles ejected from the sun. This observation program is perfectly timed as NASA’s Juno spacecraft is currently in the solar wind near Jupiter and will enter the orbit of the planet in early July 2016. While Hubble is observing and measuring the auroras on Jupiter, Juno is measuring the properties of the solar wind itself; a perfect collaboration between a telescope and a space probe. “These auroras are very dramatic and among the most active I have ever seen”, said Jonathan Nichols from the University of Leicester, U.K., and principal investigator of the study. “It almost seems as if Jupiter is throwing a firework party for the imminent arrival of Juno.” Credits: NASA, ESA, and J. Nichols (University of Leicester)

Black-hole-powered galaxies called blazars are the most common sources detected by NASA’s Fermi Gamma-ray Space Telescope. As matter falls toward the supermassive black hole at the galaxy’s center, some of it is accelerated outward at nearly the speed of light along jets pointed in opposite directions. When one of the jets happens to be aimed in the direction of Earth, as illustrated here, the galaxy appears especially bright and is classified as a blazar. http://photojournal.jpl.nasa.gov/catalog/PIA20912 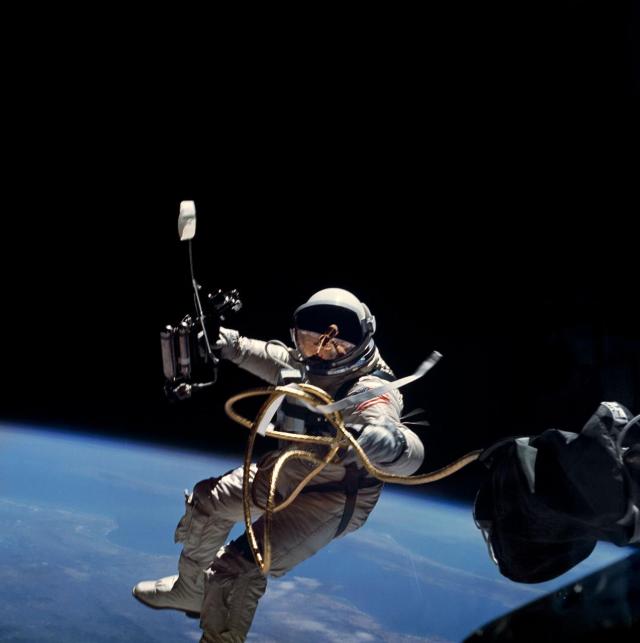 S65-34635 (3 June 1965) — Astronaut Edward H. White II, pilot on the Gemini-Titan 4 spaceflight, is shown during his egress from the spacecraft. His face is covered by a shaded visor to protect him from the unfiltered rays of the sun. White became the first American astronaut to walk in space. He remained outside the spacecraft for 21 minutes during the third revolution of the Gemini-4 mission. He wears a specially designed spacesuit for the extravehicular activity (EVA). In his right hand, he carries a Hand-Held Self-Maneuvering Unit (HHSMU) with which he controlled his movements while in space. He was attached to the spacecraft by a 25-feet umbilical line and a 23-feet tether line, both wrapped together with gold tape to form one cord. He wears an emergency oxygen supply chest pack. Astronaut James A. McDivitt is command pilot for the Gemini-4 mission. EDITOR’S NOTE: Astronaut Edward H. White II died in the Apollo/Saturn 204 fire at Cape Kennedy on Jan. 27, 1967.