The Silicon Critic by David Langford

Milford participants often have distinctive personal crotchets when commenting on stories, and John Brunner’s (as I remember from the 1980s) was a particular sensitivity to repetition. Sometimes it seemed that the unintended re-use of a significant word too soon after its last appearance pained him more than a gaping plot hole. The “deliberate repetition for effect” card could be played only so often, especially if you hadn’t noticed the repetition of “repetition” and the fact that it’s now appeared four times in one paragraph.

Terry Pratchett was another author who worried about such things. In 1998 he invited me to write a little Windows application to monitor his own use of favourite words. This, he stipulated, was to be named Bicarb because the idea was to stop you repeating.

The computer screen here ripples and blurs to indicate a flashback. With (as we later decided) more enthusiasm than common sense, Chris Priest and I had ventured into selling home-made software as Ansible Information from the mid-1980s. Most of our products were deadly serious attempts to add new facilities to now-obsolete word processors running on computers of yore: one example was a utility called AnsibleIndex that could generate a book index of sorts from chapter documents written in LocoScript on the dread Amstrad PCW. If you remember that machine’s green screen, hideous slowness and oblong “floppy” disks, you are not alone. 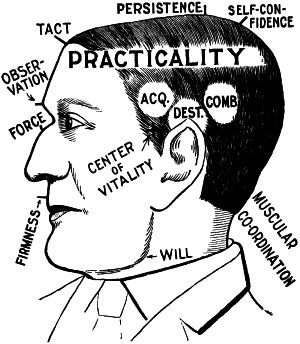 Despite our stern and earnest aims, cheerfulness occasionally broke in. One day for Chris’s amusement I fudged up an IBM PC-DOS program called Drivel that spewed out endless Extruded Fantasy Product titles. A Scroll of Steel, Gemhunter of Giantfalcon, Eye of Starnymph, The Bluebull and the Dreadflame, The Chaos Leperstaff … and so on, forever. “Make it more versatile and we could sell this!” said Chris, and Drivel duly became A.I.Q. (a name meant to suggest Artificial Intelligence, but deniably) with a wide variety of lexicons to generate cod Shakespearean verse, revolting recipes, banal aphorisms, terrible pulp SF and even – as a selling point for authors – plot ideas for short stories. All through the magic of the random number generator. An even less lucrative Windows version followed. By way of brand identity, the product logo was a chap with an ideally shaped head from a 1904 phrenology manual.

Somewhat more useful was Grease, which gobbles down your story or novel or dekalogy and spits out a report of the words most frequently used. That is, the significant words. Grease comes with an editable list of common words to be ignored, “the” and “is” and other basic nuts and bolts of prose. With these filtered out, the pitiless focus is on those distinctive words you resort to again and again, perhaps without consciously noticing. The specific inspiration for Grease was David Lodge’s 1984 academic comedy Small World, much enjoyed by both Chris Priest and myself. One minor strand involves a novelist’s traumatic discovery that his complete works have been analysed in just this way by fanatical researchers, who report that the significant word he most often uses is … “grease”. Now you know how programs get their names.

Experimenting with Grease led Terry Pratchett to request Bicarb as a more finely tuned detector of embarrassment. Rather than merely counting distinctive words, this one looks for their repetition within a specified interval – 100 words by default, but I made that configurable and Terry may have changed it. Thus the use of a favourite word like “rebarbative” twice within a hundred-word passage will cause Bicarb to pause, silently highlight both occurrences, and await your horrified reaction.

I became acutely aware of all the significant reiterations in Terry’s test document, which was the first draft of Carpe Jugulum (1998). Refinements were added: besides the “always ignore” list of commonplace terms, there was clearly a need for an “ignore for this book project” list, which filled up with character and place names from Carpe Jugulum and Discworld in general. Terry seemed pleased enough with the results.

By then, Ansible Information was already fading away. Both Chris and I had found other things to do, and Bicarb never went on sale to our hapless customers. In fact Chris never saw it until this year, when in the course of some mysterious literary research he reacquainted himself with Grease and I suggested that with a few cosmetic tweaks to bring it up to date, Bicarb might also be useful. He tried it and reported: “Bicarb is a weapon of mass destruction! I ran it over Indoctrinaire, and crept away, limping and bleeding.” Just like a Milford session, then.

Ansible Information, you will be relieved to know, has long ceased trading. But many of its doomed products – including all those named above – can still be downloaded at no charge from https://ai.ansible.uk/. Can you resist learning whether your favourite word is “grease” or something even more alarming? 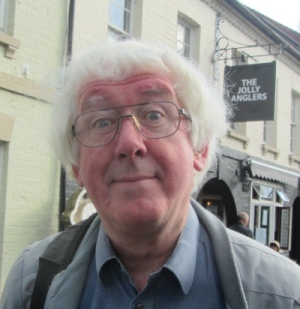 David Langford, as his mother used to put it, hasn’t had a real job since 1980. Since then he has published lots of stories and books – most recently the column collection All Good Things: The Last SFX Visions from NewCon Press – won a number of awards and tried in vain to give up publishing the SF newsletter Ansible (1979-current). He spends too much time working as a principal editor, with John Clute, of the SF Encyclopedia. More at ansible.uk and news.ansible.uk.

7 Responses to The Silicon Critic by David Langford