Fantasycon by the Cathedral, Peterborough 2017 – A Review by Terry Jackman

Peterborough. A slightly puzzling location at first sight, a mix of some rather ‘mean streets’, a very pretty shopping arcade opposite the hotel – which hosted the art exhibition – and a beautiful Medieval cathedral area beyond. 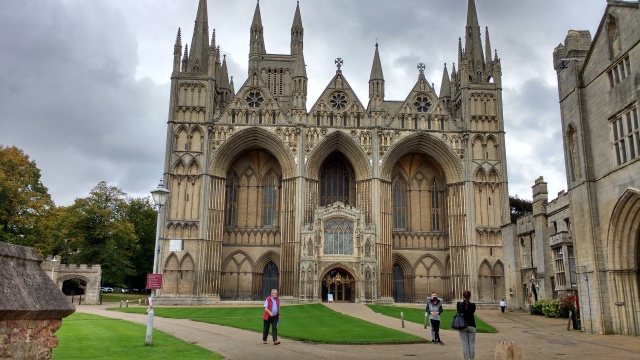 Where the prettiest medieval house front I can recall housed a Pizza Hut on the ground floor. See what I mean about a mix?

The con itself was much more consistent, and of a high standard, both for content and efficient running. Many thanks to those who organised it, and a special mention for whoever designed all the gorgeous posters. I was also impressed by the double page spreads allotted to each GOH, with faces, bios and book cover images, though the programme size was unfortunate. Most people I knew resorted to ripping the day’s pages out rather than lugging it around. And I did find it odd that several pages were given to a piece of fiction, but there was no layout map, or indeed any opening times included. But that was a blip in an otherwise exemplary effort.

The event has become a contrast to say Eastercon by being increasingly geared towards writing rather than readers. I find this both a useful distinction, and an attraction. This year’s selections certainly seemed aware of that. Panels covered such topics as reviewing, critiquing, writing courses, ghostwriting, collaboration, writing for TV, audio or gaming. Then there were options such as being a business, markets, self publishing, small presses, assessing book covers, building anthologies. All good stuff for writers and/or those with related interests.

Not forgetting the workshops on such things as podcasting, world building, comedy, self-editing and writing submissions. I doubt I was alone in being impressed by the choice, and quality. For once most of the discussions I saw seemed to have been properly prepared rather than the dreaded ‘off the cuff’ variety.

Did I spend any money? I’ll own up to a little over the bar. Didn’t we all? I also spent some in the dealer room, which was a much better location than last year when the tables were so scattered some were invisible. This year’s setup was one location and even included a snack bar area; intelligent and probably a real boon to dealers who were glued to their stalls so much. I always like the secondhand stall for those forgotten gems, though I’d love to be able to buy ebooks at cons too. And ah yes, the jewellery stall…

So overall, as you can see, it was well worth the trip ‘down south’ and meeting up with friends is always the icing on the con cake, especially those I wouldn’t see otherwise. So, a great choice of things to do, places to eat, smooth organisation and a very good venue, if you didn’t mind the stairs in the hotel. Plus a crowd of cheerful, like-minded people.

Terry Jackman: wrote articles, study guides and actual exam papers for about ten years. She has several short stories published. Attended Milford for the first time in 2011, and several times since. Runs the BSFA Orbiters crit schemes. Her first novel, Ashamet, was published by Dragonwell Publishing in 2015, and she blogs at TerryTalk, to be found on www.terryjackman.co.uk
Twitter: @terry_jackman