Posted on 13 September 2016 by Jacey Bedford 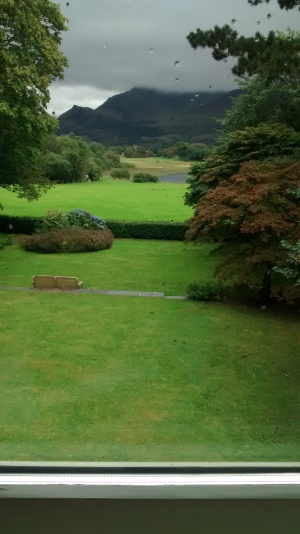 Jacey Bedford writes: And the rain it raineth every day. It’s very British to be obsessed by the weather, but here at Trigonos there’s an awful lot of it. The view from the house is not only of the lake but also the Nantlle Ridge on the other side of the valley. The old joke keeps coming back to haunt us… If you can see the hills it’s going to rain. If you can’t see the hills it’s raining already. Today – the wind has dropped and the rain is falling vertically in what my granny used to call ‘stair rods’.

The venue consists of the main house and a range of outbuildings which have been converted into accommodation and meeting rooms. The main meeting room where we hold our crit session is in the far reaches of the converted outbuildings. Luckily Trigonos has very kindly left a few huge umbrellas by the door for those who have not brought rainwear.

As I write it’s noon. Lunch is at 12.30 and the crit session starts at 1.30. This will be our third day of critting. The three newcomers to Milford have all had their first piece critiqued and I’m very pleased to say none of them rushed screaming from the room muttering, ‘But you don’t understand my genius!’ Not that this happens frequently – or ever – but there’s always a first time. Those of us who’ve been to Milford before know how thorough crits can be – but they’re always offered in the spirit of trying to make the piece better. The intense level of detail can shock people who’ve never been through it before. Thankfully our three Milford virgins are all pretty shock-proof.

Below: old hands at critting and being critted: Dave Gullen, Terry Jackman and Guy T Martland.

Guy T Martland writes: I am back here for my third time, so I guess you could call this an official addiction.  Once bitten, it won’t be long until you return: steering the car through the winding roads, deftly avoiding the stone walls, the sheer mountainscape encroaching on either side, probably some dragons sleeping in a nearby valley.  Then a glitter in the distance: the late evening sun catching on the lake of Nantlle.  It takes a while to get here, but my is it worth it!  Moments: Sitting outside on a bench in between crits, watching the low cloud lick the surrounding mountains.  Catching up with old friends and making new ones in the library, whilst playing Cards Against Humanity (and indulging in a variety of alcoholic beverages).  Exploring the world of Mordor (the ancient slate quarry behind the centre).  And of course, the moment your crit has happened, when you realise that you managed to string a few words together in a manner that some people thought interesting… I’m sure it won’t be long until I’m back for more.

Dave Gullen writes: Day 4 and the strain of Milford is starting to tell. The sheer effort of scheduling work around five meals a day is becoming exhausting. So far I have eaten approximately 300,000 Kcal of exquisite food, I can no longer fit through the doors and am worried that I may get stuck negotiating soft ground. Could not be happier.

Siobhan McVeigh writes:  Time folds in on itself here.  As the mist falls down from the mountains it’s easy to roll along with it, wrapped in imaginings.  The fifteen of us have sat down to eat together at the long table for a couple of days, and last night we were joined by a fellow guest on a painting holiday.  Something about being away for a week in a large house like this already feels like a classic whodunnit, but having a new place laid at the top of the table makes that feeling even stronger.  Will there be an empty seat at the table tomorrow for breakfast? And whodunnit? And were robots involved…